“Oh, well at least the kids must find that interesting.”

– Opening to half a dozen conversations I’ve had with non-teachers.

We’re not in the ‘90s anymore, and sitting a kid in front of a computer generates little more excitement than sitting them in front of a toaster. In a society where computers are truly ubiquitous, they can’t be expected to be intrinsically exciting. How impressed would you be to find a TV in a classroom? What if I said it received Ceefax?

This isn’t a bad thing, it’s just the process of innovation – or the final stage in the hype cycle. New developments only remain interesting for as long as they can be called new developments… technologies older than that (or “the most profound” technologies, as Marc Weiser said) simply disappear into the fabric of our lives and are thereon taken for granted.

From this, the only logical conclusion is that – in the eyes of the only people that matter, students – ICT is no longer a new subject. It’s still treated as such… viewed as a hip and trendy subject by outsiders, or a mealy-mouthed Micky Mouse affair by (some) teachers of other subjects.

So how do we teach ICT in a meaningful way without boring the buggers to tears?

When I watch children playing video games at home or in the arcades, I am impressed with the energy and the enthusiasm they devote to the task. Why can’t we get the same devotion to school lessons as people naturally apply to the things that interest them?

Read that quote through. Have you had an “uhm…” moment yet? If not, the problem is with the last sentence. If you’re anything like me, after reading it a couple of times the question becomes “why can’t we get the same devotion to [REALLY BORING] school lessons as people naturally apply to the things that interest them?”

But it’s actually worse than that in that the REALLY BORING goes unsaid, as if it doesn’t need to be said. Kids like doing what interests them… if only we could find some way of introducing that enthusiasm into the classroom.

Maybe try interesting them, Don. I don’t know whether this is an overly tart Brit missing an American attempt at irony, but in my defense Marc Prensky uses the quote in the chapter of his book dedicated to motivation. Classroom-based education & engagement/interest/enthusiasm aren’t mutually exclusive now, and never have been.

Donald Norman was talking obliquely about harnessing interest & enthusiasm in “the classroom”, but I’d like to focus in on the ICT room.

Most kids view the traditional ICT fodder of spreadsheets & databases as being as far removed from their home computer use as reading a poem in English or designing a desk tidy in Tech. There doesn’t seem to be the difference in attitude towards ICT (or IT, back then) that my generation was brought up with – that it’s something new, something different.

Certainly, using functions & formulas in a spreadsheet is no more intrinsically rewarding for students than solving for x. A different way of handling numbers, sure – but no more engaging or exciting an activity because of the presence or use of a computer.

As I said in the opening, this isn’t a bad thing, but how can an activity in an ICT lesson (a subject that by its very nature is applied) be truly engaging when it’s viewed as academic, with little relevance to the students’ world, or the wider world?

I’m not suggesting that spreadsheets & databases shouldn’t form part of the curriculum, but anyone presenting one as a tool for tuck shops to calculate profit & loss, and the other as a tool for a video rental shop to keep track of loans needs to brush up on their meaningful examples. Just ask a fifteen year old where they rent their videos from. Maybe they’ll tell you they use LOVEFiLM, or that they’re looking forward to streaming movies to their Xbox 360 from Netflix like the Americans do.

Keeping current allows teachers to engage students in discussions about the impact of ICT, progress being made, and the march towards utopian/dystopian technocracy, depending on your point of view. Hell, with a little more encouragement you could even nudge the students into forming their own opinions about it.

By invoking my year 8 students’ understanding of the iPhone, they were soon thinking quite deeply about human computer interfaces, and different ways of controlling & using technology.

“How many buttons do we need?”

“We only need a power button. Everything else can be on the touch screen, but that won’t work if it’s switched off so we can’t lose the power button.”

Keeping up to date is remarkably simple in this age of syndication. You don’t have to scour the web for news, read the papers or watch TV to find out what’s going on. You can easily combine RSS feeds from most major websites using a feed reader such as FeedDemon, or integrating them directly into an iGoogle or Netvibes homepage. My homepage looks like this: 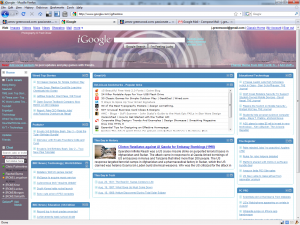 Hell, you can even subscribe to this site via RSS if you want to, though I make no promises to update as much as the ones above do.

Or, if you prefer, combine the day’s news from as many feeds as you like into a Tabbloid, a customised PDF newspaper emailed to your inbox as often as you want it:

Either way, let news come to you. Don’t battle your way through it all, just take the time every now and then to dip in and see what’s going on in the world of technology. Like the rest of the world, you’ll probably be surprised.