The Chinese system of writing is one of extremely strict rules that can only be mastered through drill and practice. A discovery- or inquiry-based approach to learning how to write in a written language that works based on characters rather than an alphabet (traditional and simplified Chinese, Japanese) would in the eyes of many (but not all) Chinese language teachers be an ineffective means of learning the fundamental skills needed to write in that language. 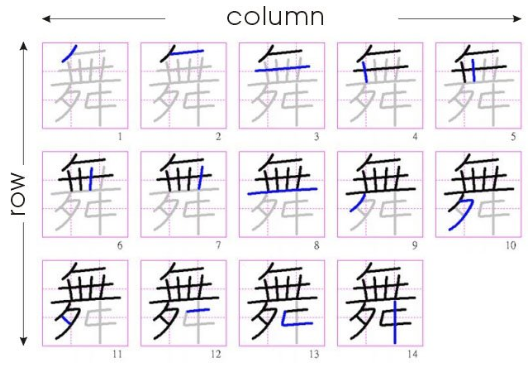 To what extent is instruction for writing Chinese characters informed by the highly rule-based written language, and to what extent does that inform other aspects of Chinese pedagogy?

By way of comparison, approaches to handwriting in many English-speaking countries had stopped placing significant emphasis on development of a particular form of handwriting (cursive, for example) in the 1950s-60s. An article from 1974 lamented this shift:

Many children in school today have not been taught the mechanics of handwriting and as a result do not know how to write legibly. As a backlash to the meaningless and seemingly endless drill in making the ovals and push-pulls of previous years, practice has frequently shifted to the opposite extreme. Many teachers were not trained in the techniques of teaching handwriting and as a result either taught it incidentally or not at all, once initial models of letter formations were presented.

This article goes on to suggest a multisensory approach as the most appropriate way of teaching letter formation (p. 208), with creative writing being the logical extension of handwriting instruction once basic letter formations are mastered. Whether this sentiment would be echoed by Chinese writing instructors is as yet unknown, but not considered likely.

At the recent Christmas Bazaar I got to catch up with some friends who used to work at my school but left teaching to set up an education startup called Skyrock Projects, offering creative tech programs for kids aged 8 to 15. When they first described the idea to me, I suggested that they pitch it to parents as: “If you’re worried about your kid getting a job, send them to the buxiban...

Student attitudes towards constructivist assumptions were investigated in a study conducted at Erasmus University Rotterdam (Loyens, Rikers & Schmidt, 2007) using a questionnaire containing statements about four constructivist assumptions: The importance of knowledge construction Cooperative learning Self-regulation The use of authentic problems A sample of first-year psychology students...